The trip to the United States has brought some interesting days. Arriving at Washington D.C. airport separated Chuck from Rackson for two hours. Chuck an American citizen goes one way and Rackson sent another way. They asked and asked Rackson why he was here, how long he was to be in the United States and who paid for his trip. As he explained many times he is here to Thank those for helping with the mission in Malawi and give an update to those many churches and people that have so much love and Prayers for the children and people of Malawi. The immigration kept telling Rackson to go! Just go! Rackson with a deer in the head lights look said WHERE? It can be confusing for someone that is honest and innocent coming to the land we take so much for granted.
Rackson's first week has been so overwhelming. Lots of food, lots of people doing something or going somewhere! Electricity when you want it, Water when you want it, and Lots of food when you want it! You know Chuck when he is hungry there is Chuck. 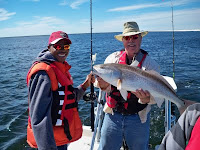 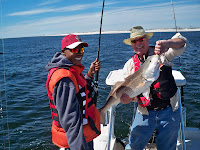 Thank You Mike and Pastor for taking Rackson on his first fishing trip! WHY do you throw back the fish???
No comments: