I have been not feeling well starting on 31st till to day when I went to see the Doctor, i went for blood test and they found that i have malaria+1 but no i feel better after i take medicine, you know this time around in the rain season many people manly children lose their lives through Malaria, plz pray for us. 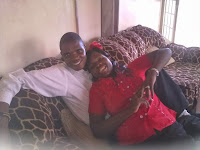 I have been in contact with Rackson and he is doing much better. He tells me that on the last outing with the soul winning team that 30 souls were added to the kingdom and several families joined with Bible Way Njuli. The work continues at Mbulumbuzi, still trying to reach an agreement over some land for the church building, land is very expensive now. As the say no more new land is being created. The money needed is approximately $1700.00 but keeps going up at the exchange rate is in flux on dollars to kwacha. The Traditional Authority is really a big help but he can only do so much in making sure we are not taken advantage of. I would love to see a new church in Mbulumbuzi as there are no independent Baptist Churches in that area.