Another full day and with the blessings of the Lord much will get done. I got a call from Rackson and he reported out on the funeral he preached yesterday, He wanted me to thank Bro. John for letting him use his SUV, as you know the son of a member of Bible Way Njuli passed away the other day and the funeral was yesterday but not at Njuli it was at the village of the mother. But because they are church family Rackson was asked to preach. He told me if it were not for the loan of the SUV he would have had to walk for three and a half hours to get there. The family is very poor so the church helped with the cost as did Rackson and the family, that is the way it is supposed to be done. Rackson said about 500 attended and the preaching went well with many, many hands raised to accept Jesus as Savior. 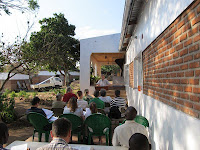 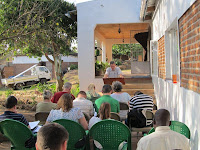 Last evening was church here at the Fullford's home and Bro. Harry preached(see pictures) a well thought out treaties on heaven, he will finish next Wednesday. Class went well for the both of us (see pictures). 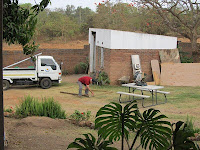 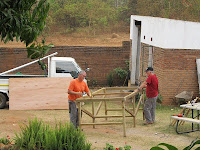 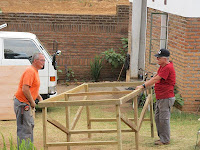 I went first and then helped John build another table his workshop in Tengani, if Harry had helped it would have been the three stooges but without him it was Abbott & Costello. (see pictures). After a late start we delivered materials to a church in the Thyolo district and had a great time with the kids got home at 1930 to no Escom but water so it was in the shower for me and then a wonderful meal of meatloaf. God is so good. Tomorrow is another full day as after class we go to Benini church (the death march) Harry gets to go.