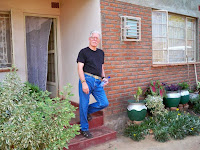 Well the adventure began this morning at 0600 with two cups of coffee, as promised by Rackson. We were out of the house at 0615 with no time for breakfast as we were off to get food for the next three days. It was a long drive to the first place where we were going to pick up goats; we bought two from a member of the church. That’s what Rackson tries to do but it was not enough and he wanted too much kwacha so we were off to the big goat market out in the countryside. After a good while we arrived to the loud bleating of many goats and a few sheep. We picked the best for the price and headed back to the church with a stop at Rackson’s grandmothers house. We picked up a very large cooking pot for the nsima along with a huge amount of cabbage and tomatoes. After a few minutes of chatter we were once again off to Bible Way to drop off dinner and head back home with a few stops in between.
We hit the “Mercury House” bakery where a large amount of rolls were waiting for us, about two hundred in count. As I was setting there in the lorry I was day dreaming of a breakfast at the “Golden Corral” but I was happy when my son brought me a swarma from the bake shop as you can see it is a little triangle of dough with meat in side along with a cold water life is good. 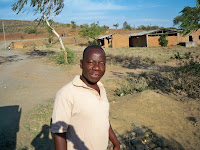 Once we left the bakery we headed home but needed to stop and get some charcoal for the cooking of the evening meal. I asked Rackson if I could watch the meat being prepared and he said “No” and I said OK. I was thinking of the time in Mexico and watching the man butcher a pig. After a little thought I understand Rackson’s reluctance of me watching. I was visualizing nice small chunks of meat in broth being served over nsima with vegetable but then I remembered Paul’s admonition on meat, “don’t ask. don’t tell”, Maybe I am better off not knowing. We got home right at ten a.m. and it is shower time and study time and rest time for me. It is going to be a long day and longer evening.
More on my adventure later.
Because of the Cross,
Bro. Chuck or as they say Dusty 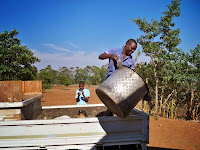 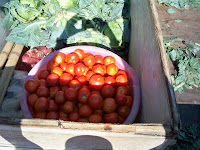 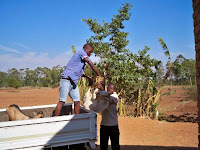 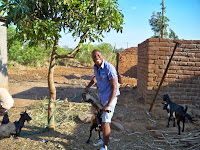 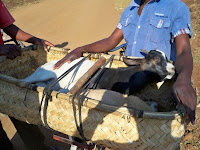