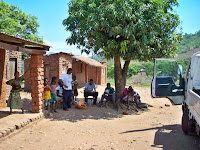 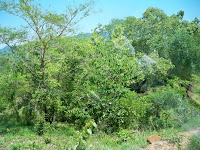 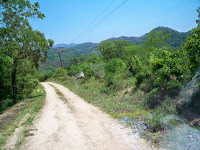 And I hope this is my last adventure in Malawi. We arose early to start the day. I hit the rain room right at 0500 and felt pretty good for about ten minutes. Rackson banged on the door at 0530 and said we needed to eat and get ready to leave as we needed to be at Dave’s house by 0630. We had left the lorry at his house yesterday and he had it all loaded and ready for the drive to Tengani which is about 30 K north of Nsanja. We had oatmeal, toast, orange juice and two cups of hot coffee and were on our way to Dave’s.
Dave needed to take many boxes of tracts and material for building shelves to hold the tracts at the new compound. Our purpose going was to get some pictures of the compound and personnel working there and send to John Fullford back in the states so he could see what he is coming back to at the end of his sabbatical. Also he asked Rackson if he would try and locate home / house to rent while building a home on the new compound, he would need for about a year. We added that to our itinerary and were about ready to set out. I was still feeling a little under the weather but ready for a new adventure, little did I know. 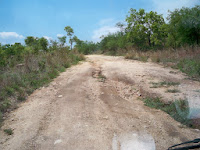 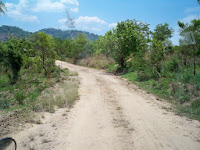 As we left the plateau the temperature was mid 80’s with a light breeze and our lorry had air conditioning. As we descended into the lower Shire Valley we were in the low 100’s and it was early. We got to the compound in a little less than 4 hours of hard driving with only one water stop. Things were going well and all the pictures I needed were taken, the lorry unloaded and I was well pleased as it was HOT, I don’t mean hot I mean HOT and all I wanted to do is take a look at a house or two for John, (did I mention I l love John and his family?) and was glad to do something for them as they have taken very good care of me in the past. The place was in Nsanja about ¾ hour drive south. When we got there we were met by a woman who would take us to the place. We went and once again I took the required pictures and it was done. Dave’s wife packed us a lunch so we choked them down with a cool bottle of water and were on our way, not so fast! Dave’s mission was not over he needed to pick up some lumber he had proposed to buy and the guide was there to show the way. Having to have a guide was a clue that we were heading into something and I was right. We were in for a long drive over some of the worst road I have ever been on, it made the Burma Trail of WW2 look like interstate 10 on a Sunday afternoon. Once we left the main road, always a bad idea, we started up 13 miles of BAD road to this mythical lumber camp. 90 minutes later in the hot part of the mid-day we got there and while loading Rackson got the people together and preached the gospel to a group who may never have seen a missionary let along a white missionary. Did I mention it was a little warm up there? We could see Mozambique which was less than a mile from where we were. I was ready to leave while I still loved John. 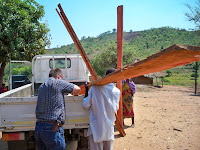 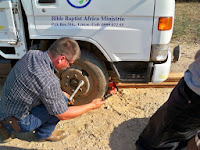 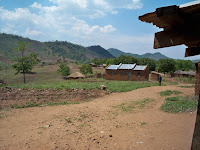 On the way down there were some spots in the road (so called) that we needed extra weight so we paid natives to ride in the back for added traction while crossing damp stream beds. The lorry was in granny low as the road was so steep going down we were afraid of loss of control. Low RPMs means no air conditioner as it is a direct drive system, love the Chinese. After another 90 plus minutes we were back on the main road and heading home to Blantyre which was another 4 plus hours. Not so fast! We were on the road no more than 30 minutes and hopes were high and I was beginning to feel like I might make it and BOOM we blew a right front tire. After much discussion on how unhappy we were, it was mentioned that if you have to get a flat this was the best place as it was level ground and not on the mountain pass we just left, yes God is good. We did have a spare and jack and lots of lumber so in about 30 minutes we were on the way home. We made one stop for a cold drink and headed out. I have never been so hot and tired and dirty in my life.  It was this hot in Saudi Arabia and this hot and dirty in Vietnam but I was 40 years younger and thought I was invincible, my how time changes your thought patterns. We got home well after dark picked up our van and drove home to a hot shower and a soft bed. I hope John gets boils.

Because of the Cross,
A dusty but pleased Bro. Chuck 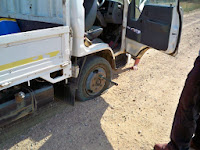 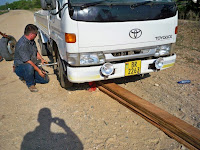 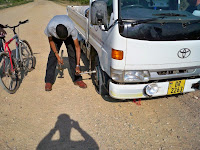