Malawi, C. Africa
9:30 pm.
The day started as well as can be expected for being the third day without running water. My first thought was I was grateful for the “Living water” I was going to share later on in the afternoon. Grace was up first and my water for coffee was ready when I stepped out of the bedroom.
Soon after breakfast Dave Mowery of the Bible Baptist African Ministries called and asked for an assist, he need a LARGE LPG container exchanged and was not feeling up to it. Dave lives an hour from here but the roads are not too bad so off we went. When we got there it took Dave and his sons to get that bad boy on the lorry. It was another 30 minutes to get to town and find the place called Mr. Gasman’s, (how cute).
We made the exchange except this time only one guy did the moving of the LPG cylinder; he rolled it out and lifted it onto the lorry. Rackson was paying the bill and getting the receipt so I took the time to talk with this guy. This guy was the same height as I but had me by about 20 pounds and no fat on this boy. I ask him where he went to church and he told me he was Catholic but had just moved to Blantyre. He knew where Njuli was and I invited him to church Sunday. He said if he didn’t have to work he would like to visit but if not this week then next. I gave him some tracts and thought about punching him on the arm as friends do but thought better of it. Momma didn’t raise no fools.
Next it was off to Limbe to see the lawyer and check the progress of our certification. After a rather long wait Rackson was called in and after a few minutes he came back out and told me it was in the works and would be signed by the judge soon. Rackson will stop by many more times before it is completed as that is the Malawian way. We called Boneface and ask if he would bring a few trinkets for me to see as after all I am a tourist. When he got there we looked them over but Rackson said he would think about the price and get back to him. I am spending his money after all.
We went to the bad side of town to check the price to have seats put in the van and knew we would get a high price because I was there.  I did not see much difference in the bad side of town from where we had been with the exception of there is many road side shops and the traffic was awful. 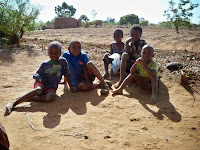 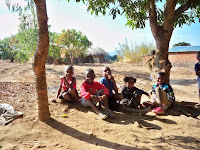 I am not a mathematician but I do know logarithms, law of probabilities, statistics and the randomness of the universe so while sitting in a massive traffic tie-up it occurred to me and the numbers I ran on my cell phone calculator “there should not be anyone who drives in Malawi alive past the year 1997” go figure. 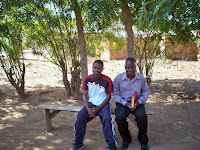 When we got home from Dave’s we were running late, Grace was unhappy and I was already exhausted, it was boiled eggs, cheese and bread for lunch then off to pick up the team for soul winning. We then headed for Mbulumbuzi to canvas as much of the village as we could and invite them all too church service at 3pm Sunday.  We had Prayer and thanksgiving for all the blessings of the day and asked God to send His Spirit before us and prepare the hearts of the people. The prayer is always for just one soul to hear and believe. As were walking the trails to the home we met with lots of villagers and were passing out tracts and inviting people to service, many were reluctant to take the tracts and really didn’t want much to do with us, (this was new to me as I am so loveable most people can’t wait to talk to). Rackson was told they thought we were the Jehovah Witness and wanted nothing to do with us. After we told them we were Baptist things went swimmingly. This happened every time we met or talked with someone. I asked them “am I wearing a tie?” they got it; it was good for a laugh and a nice ice breaker. 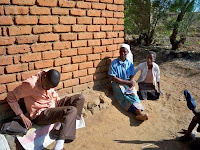 One of the first houses we stopped at was a Muslim woman and I was not connecting well from the get go, Rackson took over and spent a good deal of time answering her and showing her in the bible about the Lord and the difference between what she had been taught and the bible. He prayed with her and she accepted the Lord and asked if he would talk with her husband as there were problems in the family.
As we were walking we came across some young boy playing and they all had cups they were carrying as we went past Rackson asked to see what was in the cups, the kids weren’t playing they were digging grubs for their evening meal (again, don’t ask, don’t tell).
We all met back at the Chief’s house and reported out on the power of the Word. Many, many homes and persons were invited to come and worship with us and 54 souls were added to the kingdom this afternoon. We had to leave and drop everyone off before dark and then Rackson and I came home washed up and it was off to see the man about the van seats-he would make them and have them ready for installation on the coming Monday at noon, it must have been a good price as Rackson said yes and we were off to the house, late dinner and for me BED.
God has been good to the ministry and I see a new church being planted, please pray for me and Rackson for this Sunday, it is a lot of pressure and I am fearful about preaching the word of God to so many for their first time and not presenting well.  I want to lift up Christ, only He can draw all men to Him. I don’t have the power and I for sure need prayer.
Good night from Malawi. 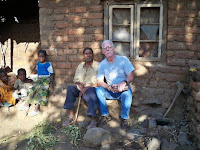 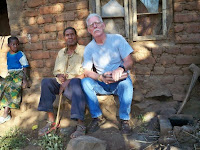 Your Servant,
Bro. Chuck the dusty