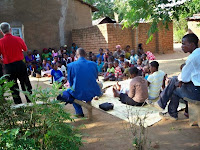 Njuli, Malawi, C. Africa
Bedtime
Oh what a great day the Lord has provided first at BWBM, Njuli and in the afternoon at the village of Mbulumbuzi, seven miles from Njuli.

Sunday morning service attendance was down a little, I am not sure we hit 200 but the singing, which I videoed and will show when I get back home, was most exuberant you might not believe this but I found my foot tapping to the beat. Rackson taught a good lesson from Colossians 3:1-6 and we are coordinating the teaching on the Doctrine of the Church. As I was listening I knew where he was going but I was fascinated by how a Malawian frames a question and then arrives at the answer. Now I know why they have problems translating speech and written English (American) it’s a whole different language. Duh!! When it was my time I brought a lesson titled “God knows your name” and started with Adam and ran it all the way to the NAME of Jesus and the power in that name. At the conclusion of the invitation many came forward for prayer and one young lady confessed the name of Christ and asked to be saved and become a member of the church at Njuli. She was from another village but was living in Njuli now. She has been visiting the church for a few weeks. What a blessing to have her as a sister in Christ. 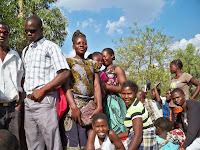 It was announced that we would be going to Mbulumbuzi at 3:00 pm. and we would be picking up the choir at the church by 2:30 pm. half the church wanted to go and help be a part of the program. 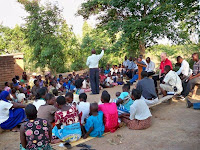 It was heart breaking to tell them there was no room in the lorry for all of them but a few; the choir, the church leaders and a few young men to help with passing out tracts. Rackson and the family left for home about 12:20pm to have lunch which Grace prepared before we left in the morning.  We had a few minutes of rest and it was back in the lorry and off to pick up those who were going for the afternoon service. 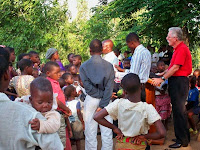 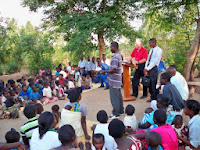 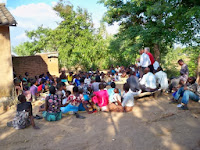 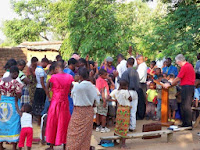 We arrived right on time, which is unusual in Malawi, to a very few people. Of course I went into panic mode because I am an American. Rackson told me to chill out it would all come together and it did come together, love that boy.  The choir started singing and really put out a joyful noise to the Lord. The young men went in the highways and the byways passing out tracts and pointing the way to the service. In about 15 minutes the court yard of the Chiefs house was filling up and we had to bring out more mats for the people to sit on. As I looked out I saw faces of members of Bible Way; they had walked from Njuli to be there. I don’t know why I should be surprised it is only seven miles one way. Our God is great. Trust me we made room for them on the way back. After much singing and speech making by the assistant Chief we got started. I had a lesson prepared that I had been working on for the last week but when I got up this Sunday morning I just could not find peace in that message. I told Rackson I didn’t know what I was going to preach so be ready for anything. While preaching the morning Njuli service the Spirit made clear that that message with a few changes was what the people of Mbulumbuzi needed to hear and I was at peace for sure. When the invitation was given, many came forward and after a few words and prayers from Rackson and the leading men of Bible Way it was reported 19 souls were added to the church. There were a lot of young people who also made their confession and they will be further discipled starting Monday. The people said they wanted to have a church planted in the village and that is what we will do with the help of the Chief and the Traditional Authority (TA). We met with him after service and made an appointment to meet formally this coming Wednesday afternoon. After much singing, praying and a few tears we packed up everyone who came plus a few more and headed home before dark. There was much excitement in the church and the new Christians were invited to the 3 day annual conference starting this next Friday through Sunday. With the addition of the 19 to the other approximately 70 new babes in Christ we will have a good start on a church, the only one in this region and one that will have a tough time due to all the other denominations who will loathe the truth being taught.

We got home after sundown and I was almost too tired to eat but Grace forced some nsima and beef down my throat along with cold water, it was good to just sit. After a hot shower and a short conversation with my bride it is off to bed. Standing in the in the sun and all those many miles of travel on some hard roads will take the starch out of your sails. Before bed time we talked about getting these new babes Baptized soon. I asked Rackson how we were going to do that and did some other building have a baptistery we could use?  He said no, Bible Way had the only baptistery and our well was not working due to the thieves steeling some of the parts to sell on the black-market. This has happened twice so the Chief of Njuli said he would not ask to have it fixed again and the village people could go without easy access to water but walk to the river and carry it back.  That’s OK for the village but I would like to have the well for the church so we do not have to Baptize in the river. Rackson has talked about this with the men of the church and assures me that if fixed again the church would only use the well on Sundays or special days like meetings or most importantly for Baptisms and then take the parts the thieves would take and take the parts home for safe keeping. I told Rackson that that expense was not in the budget for this trip but I would put the plea out in the blog. The replacement parts are few; the rods that are used to create the suction to draw the water up and into the pump portion and then out to the buckets. The most expensive part was not taken and that is the pump handle. To purchase and have installed by a professional “bore hole man” will run $250.00 but I will need $300.00 sent due to the loss in exchange of currency. I would ask you to think of your next glass of clean water and how good it is and then think if you had to walk a mile to get it, feel bad now? See if you can help. Contact my wife Sheila on the blog or send a check to Bible Way Baptist Church PO. Box 812, Milton, FL 32572 and in the memo section put “Njuli Well” The Njuli church will thank you.

Yours in the Faith
Bro. Chuck eater of dust